Fees Will Soon be Gone From Child Care Waiting Lists in Ontario, But Spaces Still Too Scarce and Unaffordable

Toronto was planning its own ban: Councillor Janet Davis

Fees to get on daycare waiting lists will be gone from Ontario this fall, but not the parental desperation in Toronto which let operators charge them.

As the province’s Liberal government announced the Sept. 1 ban, advocates, including two women who brought the issue to its attention, say bigger problems with Ontario child care remain.

Nadine Blum and Kelly Doctor thanked the government for relatively quick action to ban the fees, which they call unfair, but said daycare spaces are still too scarce and unaffordable.

“This is something that shines a light on those deeper issues,” said Blum, an east-end resident who put her child on lists and found about a third of daycares charged fees.

Some that did, including non-profit operations, asked for $20, and one she checked wanted more than $100.

The two women, both lawyers for a Toronto firm, signed people to a petition calling for a ban, which Beaches-East York MPP Arthur Potts presented to Ontario’s legislature in April.

Toronto-Danforth MPP Peter Tabuns, a New Democrat, and Potts, a Liberal, both introduced private bills on the issue, proving it ran across party lines and concerned many parents, said Blum. 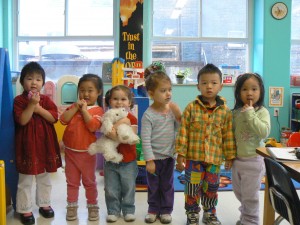 “We listened to parents and their concerns. No family should have to pay to be on a wait list,”

Ferns said the coalition’s members are non-profits and have not been charging fees, while Andrea Hannen, operations manager for the Association of Day Care Operators of Ontario (ADCO), whose members are both for-profit and non-profit, said only “a very small minority” do.

Hannen, however, said there are substantial costs for centres trying to handle their list fairly, calling each parent, in order, when a spot opens and waiting for a response.

“One family might have their names or five or 10 wait lists. A lot of them never call back,” she said.

Some licensed centres now use social media or apps instead of traditional wait lists, or just ask parents to keep calling, said Hannen, adding the province can ease the shortage with faster approvals for new daycare licenses or expansions.

Janet Davis, a Beaches-East York councillor, said the City of Toronto was preparing to ban wait list fees to daycares receiving subsidies for spaces through the city in January 2017.

Parents’ desperation remains because the system has grown little in last 20 years, and demand far exceeds supply in Toronto, she said. “Families turn their lives upside down to get child care.”

At Toronto Council last month, a motion from Davis directed the city to prepare a proposed model and budget for a centralized daycare wait list for the 2018 budget process.

Davis said some Toronto centres have different ways of filling spaces, with some giving priority to siblings, or to children attending a nearby school. Some seem to operate “on a squeaky wheel basis,” awarding spaces to parents who call the most, she said.

The province also said it will require daycares to allow families to know their wait list status and clearly explain how children on a list are offered admission.

As the federal government and provinces talk about a possible national child care system, Doctor said parents should stay engaged on child care issues. “The government’s only going to take action if it hears from people,” she said.