A private member’s bill to be put forward Thursday by NDP MPP Peter Tabuns aims to make rental housing more affordable in the province. It calls for the end of an exemption that removes rent control from nearly all rental units built after 1991.

Tabuns, MPP for Toronto-Danforth, will speak about his bill at Queen’s Park at 10 a.m. He previewed its contents Thursday on CBC Radio’s Metro Morning.

Tabuns said his bill will call for rent control to be extended to units that came on the market after 1991.

The move follows weeks of reporting by CBC Toronto on the city’s rental-market crunch, including the struggles of many would-be tenants to find affordable housing.

The issue of the 1991 loophole has been at the forefront of the discussion, with CBC Toronto’s Shannon Martin first detailing the increase on her downtown rental from $1,650 per month to $2,600 per month. Since Martin told her story, readers, listeners and viewers have shared their own similar experiences.

The change was brought in back in 1997 under then-premier Mike Harris in the form of Bill 96. At the time, the idea was to encourage developers to build more rental housing by removing restrictions on the rent they could charge.

The move didn’t spur rental property development, however, and has instead created what Tabuns called a two-tiered rental system. He said under his bill, landlords will still be able to set their rents at market value. However, it will just give tenants a degree of certainty about the rent increases they can expect in the future.

“Really, it’s not ending the whole range and ability for developers to set market rents in the first place,” Tabuns said. “What it just means is that people who are anxious and worried that they won’t be able to stay in their unit will have some protection.”

Meanwhile, landlords with older buildings say they face increases to their tax, water and hydro bills and need to be able to raise rents.

Last month, Toronto landlord Frances Newbigin told CBC Toronto that the 1991 issue creates a problem for landlords who own older buildings: How can they cover spikes in their costs without being allowed to adequately raise rents?

The 2017 rent increase guideline set by the Ontario government this year is 1.5 per cent.

Newbigin said that doesn’t keep pace with her rising costs as a landlord.

The rental-market squeeze is a growing problem in the city. With housing prices skyrocketing, more people are getting priced out of the homeowners’ market and renting for longer periods.

With more people in the renters’ market, open houses and bidding wars, once a hallmark of the buyers’ and sellers’ market, are now commonplace for rental units. There’s also a supply squeeze: the majority of new builds in the city are condo units, not purpose-built rentals. 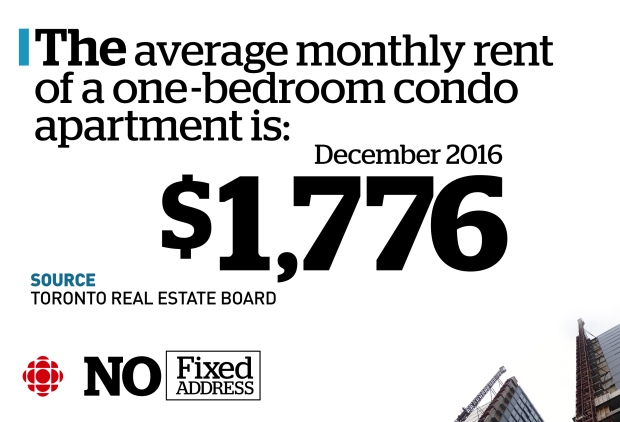 The condo apartment vacancy rate is now 1 per cent, the lowest it has been in seven years.