DARLINGTON – Early Saturday, the first of four reactors at the Darlington nuclear power plant went offline, beginning a major refurbishment project that is expected to last a decade and cost almost $13 billion.

“Right now we’re looking at about $69 a megawatt,” he said. “When this is all said and done, it’s going up to about $70 a megawatt. So we’re still keeping our electricity very affordable and clean by investing in this technology.”

Thibeault said the project will bump Ontario’s GDP by $15 billion, and support as many as 11,800 jobs in Ontario. Darlington provides 20% of the province’s energy needs.

As of 3 a.m. Saturday, the first reactor retired from service and began what Ontario Power Generation has dubbed Canada’s largest clean energy project. 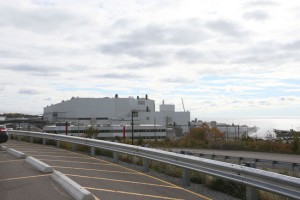 “After about 24 hours of cooling the plant down and preparing it, we’ll begin to remove all the fuel from the reactor,” said Jeff Lyash, president and CEO of Ontario Power Generation.

Fuel removal will take up to 130 days, followed by 30 days of setting the conditions for the actual work inside to begin — taking out all the internal components in the reactor and replacing them with new ones, designed to last three decades.

Then the reactor will be tested and returned back to service. Refurbishing the first reactor will take 40 months.

Ninety-six cents of every dollar spent will be spent on Ontario companies, which means that money will flow back to local communities, Lyash added.

The refurbishment is expected to finish by 2026. OPG and others have been preparing for several years to begin this project, which has attracted critics such as the NDP and Greenpeace Canada.

Back in January, the provincial NDP energy critic — MPP Peter Tabuns — called for a transparent and independent review of the business case for refurbishing Darlington.

OPG wants to run the Pickering plant till 2024.

“Then once the Darlington refurbishment is done … that’s the timeframe when Pickering will retire,” Lyash said.