The march stopped outside the mosque where a local imam, followed by a United Church minister, led an interfaith prayer

Marching along the Gerrard India Bazaar to the nearby Fatih mosque, members of the east end community mourned the deaths of the men.

“This is the real Canada,” said vigil organizer Joanne Doucette.

“You see the crowd that’s here, I’m stunned. But in a way I’m not surprised because I know from being on the phone and emails and Facebook all day long that there was a tremendous outpouring of grief and a need to express that.” 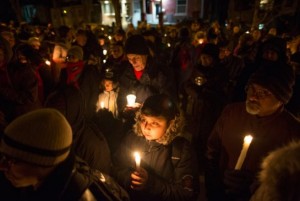 Joined by city councillors Paula Fletcher, Mary-Margaret McMahon and Toronto-Danforth MPP Peter Tabuns, the march stopped came to a halt outside the local mosque where an imam, followed by a United Church minister, led an interfaith prayer for peace and unity.

Duke Vipperman, an Anglican priest who marched in the rally, called Sunday’s attack “very counter to the Canadian spirit” but felt it proved that Islamophobia “happens everywhere.”

“It’s a universal problem,” said Vipperman. “It’s been quite traumatic for quite a lot of people. That’s just very hard to stomach on Canadian soil.”

Candles at the front of the crowd spelled out “Peace Canada.”

Event organizer and executive director of the Syrian Active Volunteers group, Sam Jisri, said he began working with colleagues to organize this vigil, and others across Canada, at around 1 a.m. Sunday night.

“All we need and want is peace. Not a country for just us, but for generations of our children,” he said. “Canada is about diversity and if you don’t agree, you’re not Canadian. We will not tolerate any terrorism in this country.”

Jisri said he believes the shooting rampage was partially motivated by President Donald Trump’s recent immigration order, which temporarily suspends all immigration for citizens of seven majority-Muslim countries for 90 days.

A number of people, including Ibrahim Hindy, took to the stage in Mississauga to share their thoughts with those gathered. Hindy, a Muslim who has lived in Canada his entire life, said “we are not going to hold what happened in that mosque against any one religion or culture or race. We are going to uphold our values as Canadians. We do have friends and allies here.”

Rawan Kahlout, who came to Canada as a refugee last year from Gaza, emphasized that all Canadians “are the same, regardless of religion.”

Jeff St. Denis spoke to the crowd while standing beside Yasmeen Youssef, a colleague and friend from work. St. Denis, who had never worked with a Muslim woman before Youssef, said she immediately messaged him when they began working together to make sure he felt comfortable.

“I encourage anyone who stays within your own bubble to branch out. You miss out on the great opportunity of learning from others and discovering just how much you have in common with them,” he told the crowd. “I’m a gay white male. Who would have thought I’d have so much in common with a Muslim from Egypt?”

St. Denis also said he finds “the newest Canadians are the most proud because they realize how good they have it.”

Annis Campione said she attended the vigil to show that “we’re all here in solidarity and here to support each other.”

“We’re all immigrants,” she said.

Many carried signs with them, containing messages such as “Muslim rights are human rights” and “Jews + Muslims together.”

Paula Jubinville, whose children Ben and Aylish held signs with the words “love your neighbour” and “solidarity,” said it was important to her that they see not just the negative side of Sunday’s tragedy.

“They are constantly hearing and taking in these kinds of things and hearing the tragedy of it,” said Jubinville. “They have to come out and see the counterbalance. That is the hope, the love and the support because it’s much bigger than the tragic event that occurred. As a mom, it’s really important that they know they can do something about it.”