Libs say they’re not abandoning renewables, but as demand for electricity falls, it’s obvious that Ontario is throwing good money after bad by going nuclear

Two years after pledging to green half of Ontario’s electricity grid by 2025, the province is dimming the lights on renewable energy.

It’s all about keeping rising hydro bills responsibly in check, the government says. The estimated savings on the typical residential electricity bill? An average of about $2.45 per month.

A hot summer and soaring utility bills have left the Wynne government feeling the heat. Last month, the premier was booed over hydro prices at a rural plowing competition. And pundits pinned the Libs’ loss of the September 1 by-election in Scarborough-Rouge River on “hydro rage.” Wynne described the need to address electricity costs as “urgent.”

Thibeault reasoned that the suspension was a “common-sense” move, since the Independent Electricity System Operator had just advised the government that Ontario is producing surplus power. But we’ve known that since 2009, says Stensil. 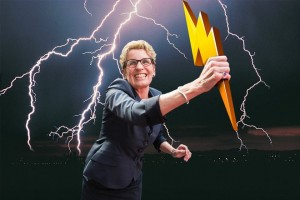 A 2011 Ontario Power Authority report released to Greenpeace through access-to-information legislation warned that the government’s decision to extend the life of the aging Pickering nuclear plant, originally slated for shutdown in 2014, would cause massive surpluses. And here we are today, as the report predicted, exporting excess power to Michigan at a loss – and taking the air out of wind projects.

At this point, green energy projects are getting heavy flak for making up 17 per cent of what’s known as the global-adjustment fee on utility bills. But no one’s making a peep about the 46 per cent of that fee that covers our excess nuclear power sell-offs or the 26 per cent for natural gas.

Former Liberal energy minister George Smitherman says the Libs are using renewables to cover their nuclear fuck-ups. “Ontario had a choice to look forward but chose to look backwards,” Smitherman said in a statement.

Clearly, given rural resistance to wind turbines, the government finds it more politically palatable to cancel wind farms than to go up against the nuclear lobby – not to mention the Power Workers’ Union, with a 15,000-strong membership representing about 70 per cent of the unionized electricity workers in the province.

Ontario Clean Air Alliance chair Jack Gibbons, a former Toronto Hydro commissioner, says, “The Wynne government is a captive of the nuclear industry and more interested in protecting jobs for members of the Power Workers’ Union than in getting the lowest possible rates for rural and urban consumers.”

He says the province could save roughly $900 million a year by closing down Pickering in 2018 when its licence expires. “Pickering was designed to operate for 30 years. It’s now 45 years old.”

Gibbons doesn’t deny that green energy has pushed up hydro rates but says nuclear is the biggest cash sucker. And those costs are about to get higher with the planned $12.8 billion refurbishment of the Darlington Nuclear Generating Station, which Gibbons predicts is unlikely to come in on budget. Last month, Ontario Power Generation went to the Ontario Energy Board seeking a 180 per cent increase in the price paid for electricity over the next decade to help finance the extension of Pickering’s life and the Darlington rebuild.

The request caused nary a ripple among critics who’ve been howling about the cost of green energy projects.

“We do have an affordability problem in Ontario,” NDP energy critic Peter Tabuns acknowledges. “A lot of that is driven by privatization, which puts us in a situation where it’s very expensive to cancel contracts for unnecessary power. Right now the province is renewing contracts with gas-fired power plants that were signed 20 years ago and [in some cases] longer.

“Wynne didn’t need to renew those if we’ve got an oversupply – and we do. She could have said no to gas and yes to renewables. Frankly, wind power costs Ontario about the same as gas-fired power, and the next round of wind procurement would have been a lot cheaper than gas-fired.”

He’s right. Recent wind contracts have been coming online for as low as 6.5 cents per kWh (and dropping), less than half the 13.5 cents the province paid for some earlier wind contracts.

Says Tabuns, “Wynne went with something she felt was politically easy and would help her in some rural ridings. [That] will have little impact in terms of dealing with people’s hydro bills but will set us back in making the changes we need to make in order to have a society that can take on climate change.”

David Cork, managing director of TREC (Toronto Renewable Energy Co-operative), notes in a recent response to the government’s decision that demand for electricity in Ontario is falling because of conservation efforts and the decline of heavy industry. It’s only a matter of a few years, he adds, before both solar and wind costs reach the point where they’re as competitive as nuclear.

“Ontario can try to ignore this worldwide trend or it can work through the transition and come out the other side with a more dynamic system that is a better fit for our changing needs.”

After a breakfast to discuss cap and trade last week, Glen Murray, minister of the environment and climate change, defended the government’s moves, maintaining that the province isn’t abandoning renewables, just hitting the pause button until it can figure out how its long-term energy plan and climate plan come together.

Ontario’s cap-and-trade partners, California and Quebec, are both dropping nukes like hot potatoes. (Quebec closed its last nuclear plant in 2012, and California is in the middle of a phase-out, recently mandating that 50 per cent of its energy be renewable by 2030.) It’s hard not to conclude that, as Cork puts it, “counting on 50-year-old inflexible nuclear plants is throwing good money after bad.”