The Ontario NDP is calling out the Liberal government over a lack of assistance for rural families compared to those in urban areas.

NDP Energy Critic Peter Tabuns brought up the issue in Question Period on Monday, saying that families dealing with skyrocketing hydro rates in urban areas can get up to $1000 in relief while rural emergency assistance is capped at $600.

“When rural families lose hydro, they not only lose their TV, they could lose their well pump, their drinking water, their toilet – the necessities of life. United Way found that in urban areas the average hydro bill arrears is $700 but in rural areas, the average arrears is over $1200 but the maximum relief available to rural families who heat with electricity is just $600.” 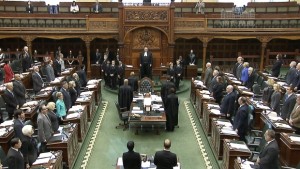 “Specifically families, seniors that live in rural areas, seniors that heat their homes with electricity, they can see up to $75 a month, Mr. Speaker, on top of the other programs that we have and in addition to the 20% that they’ll see off their reduction through their RRRP (Rural or Remote Electricity Rate Protection), Mr. Speaker. We know this is an issue and we’ve identified it and we’ve acted on it very quickly,” he began.

“We’ll make sure that we continue to look at ways that we can continue to help, Mr. Speaker. That’s been part of my mandate since I’ve taken over this portfolio over 120 some days now, Mr. Speaker, and we’ll continue to find ways to help families right across the province.”

Tabuns says the United Way of Bruce Grey has announced rural energy poverty is a public health crisis and he’s calling on Premier Kathleen Wynne to at least raise emergency assistance for those in rural areas.