TORONTO — Nestle will have to wait two years before it can even test a well it purchased in a fast-growing southern Ontario community which wanted the site for its drinking water supply.

The Ontario government posted a proposed regulation for public comment Monday that would impose a moratorium until 2019 on water taking permits for new or expanded operations that take groundwater to bottle and sell.

The Ministry of the Environment and Climate Change will also stop issuing permits for pump tests that determine the quality and quantity of water available for bottling until the province completes a review of its regulations.

“This really deals with the issue of water being withdrawn from aquifers and groundwater that isn’t returned, and we just came through a summer of significant water stress,” said Environment Minister Glen Murray.

Ontario is not proposing any immediate increase in the $3.71 it charges companies for every million litres of water taken.

However, the posting on the Environmental Bill of Rights Registry said the province is “examining a range of pricing mechanisms…to help protect and conserve water for future generations.”

“I expect we’ll hear a lot on pricing, which is a very important concern for us,” said Murray. “We’re also looking at a number of different policy outcomes on how pricing relates to conservation and how pricing and local planning can come together to get better regional water planning.”

The government wants stricter scientific requirements for water taking permits including studies on the cumulative impact of the practice, and looking at the anticipated impacts of climate change such as more severe droughts.

The proposed regulatory changes mean Nestle cannot test the water at the Middlebrook well it purchased last summer in Wellington Centre, 100 kilometres west of Toronto, which the township tried to buy for its drinking water needs.

“As a result, the community will have to wait for critical data to inform future planning,” Nestle Waters Canada said in a statement Monday.

Centre Wellington Mayor Kelly Linton said the moratorium gives the government an opportunity to change the rules around the permits so local communities have a better chance to secure a safe drinking water supply. 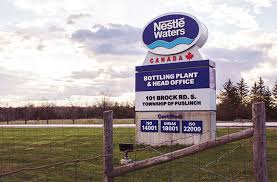 “Hopefully, municipalities will be given more opportunities to influence water-taking in our community based on solid scientific data and a long-term perspective of our water needs,” Linton said in an email to The Canadian Press.

Nestle bought the Middlebrook well as a backup for wells it owns in nearby Erin and Aberfoyle, where it operates a bottling plant that employs over 300 people.

“We look forward to meeting the province’s challenge to be even more transparent sharing data on water withdrawal in an easy to access manner with the public,” said the company’s statement.

Despite the moratorium, Nestle will be able to apply to renew its water-taking permits for the Erin and Aberfoyle wells, where it can take a total of up to 4.7 million litres a day to bottle.

New Democrat environment critic Peter Tabuns said municipalities should have first crack at any new sources of drinking water while bottling companies should be “at the end of the line,” and asked why the Liberals did not raise the price.

Progressive Conservative Leader Patrick Brown called the moratorium a step in the right direction, but said he was concerned the price Ontario charges companies for water is still insignificant.

“I hope them saying that they’re going to review it isn’t simply to deal with the media interest today and then (they’ll) kick the ball down the road like the have before,” he said.

The group Environmental Defence applauded the moratorium, and urged Ontario to adopt a deposit-return system to keep what it estimates to be one billion plastic water bottles from ending up in landfills each year.

The public has 45 days to comment on the proposed regulatory changes, which would also reduce the length of water taking permits for bottling companies from 10 years to a maximum of five years.

Read the article on BNN here.