TORONTO — The bottled water industry in Ontario is facing renewed government scrutiny after a small township was outbid by multinational giant Nestle in its attempt to purchase a well to secure water supply for its growing community.

Premier Kathleen Wynne said Friday her government will look for ways to put community needs ahead of bottled water corporations.

“As we look at the water bottling industry, that has to be a question because we’re talking about what we could argue is our most precious resource,” she said.

“There is much pressure on our water, so as we have this discussion about our water, the status of and the treatment of water bottling companies, that needs to be taken into consideration.”

Wynne’s comments came after The Canadian Press reported on Nestle’s purchase of a well near Elora from a privately owned company. Nestle said the new site would supplement “future business growth” and support its main-production site in nearby Aberfoyle, where the company has a bottling plant that employs over 300 people.

The Township of Centre Wellington Mayor Kelly Linton said they wanted to purchase the well to keep its water supply “safe” from commercial water taking long into the future, and to give the fast-growing community “control of our water source.”

The New Democrats said that allowing a corporation to pump out water and sell it across Canada and beyond while a community is lacking water makes no sense.

“The danger is you’ll have private companies squatting on water rights, effectively denying citizens access to their water unless they pay a ransom,” said NDP environment critic Peter Tabuns. 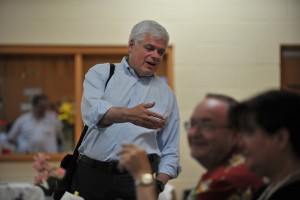 In Ontario, municipalities, mining companies and golf courses — in addition to the water-bottling companies — are allowed to take a total of 1.4 trillion litres out of the surface and ground water supplies every day.

In her mandate letters to her cabinet, released Friday, Wynne tells Environment Minister Glen Murray that “immediate improvements are needed when it comes to water bottling practices, particularly in the face of climate change, the increasing demands on water resources by a growing population and concerns about water security.”

It’s time to separate bottled water companies from the many other sectors that have water-taking permits, including mining and construction, Wynne told reporters.

“It’s not good enough from my perspective to say there’s lots of industries that need water,” she said.

“Water bottling is a different kind of industry and we need to treat it differently.”

Nestle, which has 2,500 employees in Ontario, has said it is prepared to pay more if rates were increased, but only if all companies with water-taking permits face the higher fees.

“We fully agree that all groundwater users should pay their fair share to fund the management of our water resources and all users must be treated equitably,” the company said.

Wynne’s mandate letter also told the environment minister to work with the finance minister on pricing options for water used by the bottled water industry.

Ontario charges $3.71 for every million litres of water, compared with $2.50 in British Columbia and $70 in Quebec, the two other provinces with major bottled water operations. But Wynne made it clear she wants to see bottled water companies pay more for the water they take.

“One of the reasons I want to make sure we move cautiously on this is I believe the rules need to be changed around water taking for bottled water companies,” she said.

“I think we have to look very closely at what those companies are paying, what they’re allowed to take, and that’s exactly the work the ministry of environment and climate change is doing right now.”

Meanwhile, Nestle is allowed to keep taking up to 3.6 million litres of water a day for bottling from its well in Aberfoyle, near Guelph, Ont., while the government reviews its application to renew its water-taking permit, which expired in July.

Wynne noted Nestle had not been granted a renewal yet, nor had it been given approval for a pump test to determine water quantity and quality at the Middlebrook well, which she suggested is being held up by the review of water taking permits.

“I think we need to, not just as a government but as a society, look at the way we use bottled water — of course there are situations where bottled water is necessary — but we need to look at what our expectation is of these companies and how we can put some different limits around it,” she said.

A spokeswoman for Nestle said the company agrees that it needs to pay “its fair share as should all groundwater users.”

“With only five per cent of permitted users paying 100 per cent of the cost, we believe it is important to look at all water users in Ontario to ensure the protection of the resource for future generations,” Jennifer Kerr said in an email to The Canadian Press.