I implore the Ontario government to immediately begin the long-delayed cleanup of mercury contamination impacting the people of Grassy Narrows and Whitedog First Nations.

Recently, community volunteers and reporters were able to obtain soil samples from an area near Dryden identified by a former worker as a historic site of mercury contamination. Subsequent testing done by independent laboratory facilities indicated mercury levels at 80% higher than the safe limits for human exposure.

This discovery calls into doubt the adequacy of your government’s assessment of a nearby site last June. It also raises questions about your commitment to reconciliation with First Nations.

Last summer leading environmental scientists, such as Dr. John Rudd, confirmed that samples of fish in the Wabigoon River were found to have the highest rates of mercury in the province, strongly suggesting an ongoing source of contamination.

Yet, in response to my question in the Legislature last November Minister Murray said that, “We … found there are no barrels buried and there is no source [of mercury].” It is clear that your government was far too quick to dismiss credible information from a first-hand witness, and was not thorough enough in sampling.

Not only did the government of Ontario fail in its duty to fully investigate a possible source of mercury contamination, but despite assurances from the Minister of Environment and Climate Change, your government also failed to fully consult and cooperate with the people of Grassy Narrows throughout this flawed process.

Chief Simon Fobister of the Grassy Narrows has since called on you, and Prime Minister Trudeau, to immediately investigate these latest results at the site of the former Reed Paper mill and to clean up the mercury in the Wabigoon-English River that has poisoned generations of his people.

New Democrats support this call. The time for excuses is over. The Ontario government must immediately conduct complete and exhaustive testing in the area identified as the possible site of a mercury dump. Ontario must coordinate these efforts in an open and transparent manner with the people of Grassy Narrows and Whitedog First Nations. Moreover, the Government of Ontario must hold the Government of Canada to its recent commitment, develop a coordinated action plan, and put an end to the mercury contamination of the Grassy Narrows and Whitedog First Nations once and for all.

For the sake of transparency please detail what steps your government is taking to: 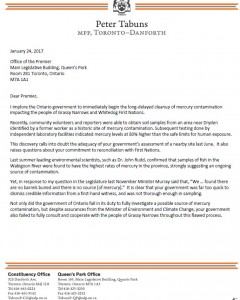 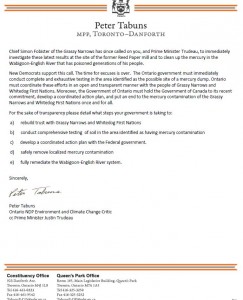