Ontario is proposing to charge water-bottling companies a little over $500 per million litres taken from the ground, amid a broader debate over the province’s stewardship of the natural resource.

Some environmental groups applauded the announcement as another step in the right direction, while others called for an all-out ban on bottling and selling groundwater for profit, but the industry noted that water bottlers are responsible for a small fraction of water-taking permits.

The Liberal government proposed increasing the fee to $503.71 following public outcry over the current charge of $3.71 per million litres. The government is still reviewing other types of water-taking permits, such as ones for industrial purposes.

“These are very unique permits,” he said. “This type of pumping was never intended from the permit-to-take-water process. It was never foreseen 30 years ago when the permitting process was put in place that people would take advantage of it, put it in a piece of garbage…and send it around the world for great profits.” 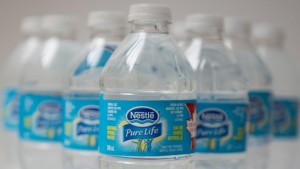 Environmental Defence called the new fee good news, noting it would be the highest in Canada, but said Ontario still needs to better protect communities’ access to clean drinking water and should give priority to “beneficial” uses such as agriculture over water bottling.

The group also called for Ontario to put a deposit on plastic bottles, similar to what is in place for liquor and beer bottles.

The province has already proposed new restrictions for bottled water companies that want to renew permits, and it has imposed a two-year moratorium on permits for new or expanded bottled water operations after Nestle Waters Canada purchased a well that the Township of Centre Wellington wanted for its growing community.

Nestle Waters Canada said in a statement that it will accept the final price set by the government after the comment period, though it suggested it takes issue with water bottlers facing a separate set of rules.

“In principle, we believe all groundwater users should be treated equally, but we understand and appreciate that opinions differ regarding the rates various water users should pay,” wrote Debbie Moore, the company’s president and CEO.

“Nestle Waters Canada agrees that water sustainability is non-negotiable and all investments in groundwater research are a positive step toward our shared prosperity and a sustainable future.”

The Canadian Beverage Association said bottled-water permits only account for 0.001 per cent of the amounts allowed to be withdrawn under all water-taking permits in Ontario, and suggested it wants to see the rules more evenly applied.

“CBA members look forward to working with government to safeguard groundwater in a manner consistent across industries, and proportionate to amount taken and environmental impact,” it said in a statement.

Premier Kathleen Wynne has spoken about a need to look at the culture around bottled water, comments that deputy premier Deb Matthews echoed Wednesday.

“We’ve got really clean tap water,” she said. “People don’t need bottled water, for the most part, and we’ve got to protect our resource.”

The Council of Canadians called on Ontario to make the two-year moratorium permanent and phase out current water-taking permits for water bottling entirely.

“Charging higher fees won’t replace the water that is removed from the aquifer and shipped out of the watershed,” the group said in a statement.

Centre Wellington’s mayor cheered the fee increase, but he would still like to see more consideration given to municipalities.

“It would be even more positive news if a percentage of the additional $500 would find its way to the municipalities from which the water is taken,” he said. “Another positive change would be providing growing municipalities like Centre Wellington increased power to control their own water sources based on their local long-term water needs.”

British Columbia charges $2.50 for every million litres, while Quebec charges $70 and Newfoundland and Labrador recently introduced a fee of $500 per million litres for water bottlers and $5 for other commercial purposes.

Ontario’s current $3.71 charge is on top of a fee of $750 for low- or medium-risk water takings, or $3,000 for those considered a high risk to cause an adverse environmental impact. The proposed new fee for water bottlers was posted Wednesday on the regulatory registry for a mandatory 60-day comment period.

Municipalities, mines, construction companies and golf courses — in addition to the water-bottling companies — are allowed to take a total of 1.4 trillion litres out of Ontario’s surface and ground water supplies every day.

“Nowhere in today’s announcement does the Liberal government commit to protecting the water needs of municipalities and First Nations communities by giving them permanent priority over commercial interests,” he said in a statement.