The pledge from the Ministry of the Environment came after the Star and Earthroots volunteers took soil samples from behind a paper mill in Dryden, Ont., which revealed elevated mercury levels.

The statement from the Ministry of Environment and Climate Change comes after the Star and volunteers from an environmental group dug holes in a clearing behind a paper mill in Dryden, Ont., and found higher-than-normal mercury levels — up to nearly 80 times the level expected to be found in soil from that region of the province.

The ministry also said that after its review it would “take appropriate investigative action.”

The samples were taken from an area circled on a map by retired mill worker Kas Glowacki, who said that in 1972 he was part of a group who “haphazardly” dumped drums filled with salt and mercury into a pit behind the mill.

The findings from soil sampled by the Star and Earthroots do not prove the existence of the alleged dump site but are enough to warrant further attention from professionals, experts say. A fuller investigation, they say, would help determine whether this mercury was spilled on the ground, if it is flowing sideways through groundwater or if it is moving up from a source below. It is also not known if this mercury is contaminating the river system.

“They need to determine whether or not there is mercury continuing to leak into the English-Wabigoon River system. If there is, it has to be cleaned up,” Tabuns said. 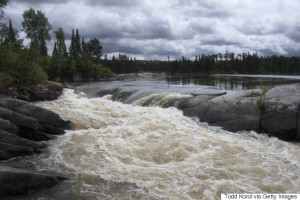 Between 1962 and 1970, the former paper mill — then owned by Reed Paper — dumped 10 tonnes of mercury into the Wabigoon River, contaminating the fish and sickening generations who rely on walleye as a dietary staple. Physical symptoms of mercury poisoning include loss of muscle co-ordination and tunnel vision. Fetuses are particularly vulnerable to cognitive damage, according to recent research.

Dangerous and persistently high levels of mercury in the sediment and fish in the river system suggest there is an ongoing source, but the province has denied the possibility that the site of the old mill — 100 kilometres upstream from Grassy Narrows — could be responsible.

Mercury has not been used in paper production at the site in decades, and there is no suggestion that current mill operator, Domtar, several owners removed from Reed Paper, is responsible for any possible ongoing source of mercury.

“The presence of a mercury hot spot confirms the need for a comprehensive survey of the entire former mill site for mercury contamination sites. Any such mercury deposits represent an ongoing threat to human health and the ecosystem,” said Gord Miller, former environmental commissioner of Ontario and chair of Earthroots.

At a press conference Friday, Miller said a proper investigation would “assure the people of Ontario, and as well certainly the people of the Grassy Narrows First Nation, that (the province is) doing everything realistically possible to ensure there is no contamination coming from the lands behind the mill at the site.”

The province searched for the alleged barrels in July, relying in part on an oblique aerial photo of the mill property the Star had initially provided to Glowacki, the retired mill worker. He circled the area he thought was the most likely to be the spot where the barrel dump occurred.

“We … found there are no barrels buried and there is no source,” Environment Minister Glen Murray said in the legislature in November.

The province searched right behind the mill, according to a report. Earthroots representative David Sone said that initially he had talked to Glowacki about the alleged site, and information from that conversation prompted Sone to tell the province to expand the search. Sone said he was ignored — one of the reasons why volunteers from Earthroots, and then Star reporters, went west of the initial search area to sample the soil.

“This government has said all along that there’s not a problem here. They’re going to leave it to natural processes to clean things up,” Tabuns said. “That is totally inadequate; in fact it’s irresponsible. This would not be allowed in Oshawa or Oakville or downtown Toronto. It can’t be allowed in Dryden.”

The Star also recently reported that the walleye near Grassy Narrows are the most mercury-contaminated in the province.

“We know the food of the Grassy Narrows people is still being contaminated,” Miller said. “We know there are hot spots of contamination. There has to be action taken.”

Tabuns said that while he believes the provincial government has primary responsibility for the mercury contamination problem near Grassy Narrows, the federal government should “kick in” as well.

The chief of Grassy Narrows has written to Prime Minister Justin Trudeau twice, asking for help, and has received no response.