Rent Control: What Will Closing ‘1991 Loophole’ Mean for Toronto?

By contrast, buildings erected after 1991—which include newer purpose-built rentals as well as the condos that make up much of the secondary rental market—are not subjected to regulation, allowing unlimited year-to-year rent hikes.

Although purpose-built rental development has gradually returned to Toronto amidst record price growth, the majority of new housing supply has come through the condominium market. Since Bill 96 was introduced, developers have built 902 condominium projects totalling 185,654 units, according to Urbanation. As reported by the CBC, approximately half of these units are “bought up by investors, who then turn them over to tenants.” As with newer purpose-built rentals, rent increases for these units are not capped, sometimes leading to drastic increases—many of which have been well-publicized.

On April 4, CBC News reported that two Liberty Village residents, AJ Merrick and Jon Moorhouse, received a letter from their landlord notifying them of a $1,600 rent hike for their two-bedroom condo. The renters were asked to either pay up, or get out by July 1.

“Tenants in those units in those buildings [built after 1991] are not protected, and they’re facing increasingly larger rent increases as the housing bubble, the real estate bubble continues to increase. They need that protection,” Tabuns explained to UrbanToronto in a telephone interview. 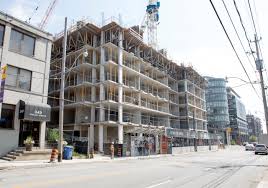 While Tabuns noted that closing the 1991 loophole is just one step towards ensuring a more affordable housing market for renters, he argues the bill will have significant, immediate impacts for hundreds of thousands of Toronto renters. “I’ve been talking to tenants in my area; about half of my riding are tenants,” Tabuns said, “and increasingly we’re getting more condos in the area, with more tenants moving into them.”

In a recent press release, Tabuns said that he met a couple in his riding living on a seniors’ pension of $1,400 per month and pay $1,000 for rent. Any rent increase would mean the couple would effectively be unable to live in their unit and afford even the most basic day-to-day necessities.

“The fact that a whole class of tenants have no protection at all has been quite stark. Certainly, even the tenants who have protection, find themselves in very difficult circumstances where landlords are trying their very best to force them out of their units. In units that aren’t controlled at all, landlords can simply dictate what the rate is,” Tabuns explained

“Including buildings built after 1991 in the rent regulation system is a long-overdue change that is necessary to bring more fairness into the rental market and to help keep rents down,” Kenneth Hale, Director of Advocacy and Legal Services for the Advocacy Centre for Tenants Ontario, said to UrbanToronto in an email.

While Tabuns’ bill enjoys widespread support amongst renters, many argue imposing rent controls will only exacerbate the City’s affordable housing crisis. On Tuesday, the Canadian Imperial Bank of Commerce released a report stating that the bill will provide developers with fewer incentives to build rental units, further driving down the supply of rental units in Toronto’s already constricted rental market. The report argues that as developers turn towards more profitable condo projects, the rental apartment vacancy rate will continue to fall as tenants are effectively forced to stay in rent-controlled units longer.

Unlike condominium developments, which typically rely on pre-construction sales, the financial viability of purpose-built rental projects is also contingent on longer-term revenue. With rent control legislation, however, the revenue growth is limited, which some industry advocates have argued will disincentivize new projects, which will only create greater demand pressure and more intense price inflation for those entering the market.

Tabuns argues that these concerns is unfounded. “We’ve had a situation now for 25 years where no new building has been subject to rent control, and that certainly hasn’t increased the number of rental units that have been built,” he countered. “I know there’s an argument made that with rent control there will be less investments; but it’s been 25 years and there’s been virtually no change. People who own buildings will continue to rent them as they see fit, they’ll just rent them in an environment where tenants have some protection,” Tabuns explained