Toronto resident Nick Pemberton used $1.30 worth of electricity at his Muskoka cottage in the fall — and paid Hydro One $82.53 to deliver it.

“It’s not a particularly overwhelming bill. It’s just silly,” says Pemberton, a computer programmer who stressed he is not looking for sympathy.

But like many Ontarians putting their hydro bills under the microscope — particularly rural homeowners clobbered by the punishing costs of electric heating in areas without natural gas service — he is looking for some answers.

“I posted it on Facebook as a joke. And then I heard from people who were paying $120 or $130 on delivery further away,” adds Pemberton, whose century-old family cottage is on Lake Joseph. “It’s crazy.” 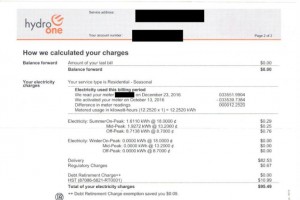 As preposterous as a bill like that sounds, Premier Kathleen Wynne agrees it’s no laughing matter.

“Every month, people in our communities are struggling to cover the total cost on their bills,” she says.

Wynne acknowledges that distribution fees need a closer look as her government scrambles to defuse consumer anger and frustration.

“There are people in the province paying disproportionately high delivery charges,” Wynne told reporters in Kitchener.

Typically, delivery fees are 30 to 40 per cent of a bill.

Based on the cost of building, maintaining and keeping transmission lines in good repair — Hydro One alone has 123,000 kilometres of wires carried on 88,000 towers over a service area twice the size of Texas — the fees can vary widely depending on where you live and how much electricity is used.

“We just have not landed on exactly what it is we’re going to do.”

Industry insiders say there is no “magic bullet” but possible solutions for easing bills include subsidizing the delivery fees through tax revenue, putting a share of expensive new sources of renewable power on the tax base instead of hitting hydro ratepayers, or equalizing delivery charges by raising them in cheaper-to-serve urban areas to offset costs for hard-hit customers in remote ones.

“We’re one of the few systems that does this,” Ferio Pugliese, hired from consumer-friendly WestJet last fall as Hydro One’s executive vice-president of customer and corporate affairs, said of Ontario’s patchwork of different regional delivery fees.

“City folks are not feeling the same pain.”

That would allow people with electric or oil heat to convert, saving thousands in the long run because natural gas is one-quarter the cost of electricity and one-third the cost of fuel oil.

Some help on high bills arrived Jan. 1 when the province began waiving the 8-per-cent provincial portion of the HST on electric bills. Customers in remote rural areas are getting extra aid, lowering their costs by a combined total of about $45 monthly.

“Many of them are older dwellings, not the most contemporary by way of insulation,” said Pugliese, who was raised in Kerns, population 360, near Kirkland Lake, Ont.

Delivery costs are higher in northern and rural Ontario because there are fewer customers served by the lines in a situation he describes as “more hydro poles than people.” In Toronto, there are almost 1,200 customers per square kilometre to share the costs.

Figures from the Ministry of Energy show the average monthly charge for delivery of electricity is $32 for typical household consumption of 750 kilowatt hours. That includes meter reading, general utility operations and a variable charge based on the amount of power used.

The fees range from a low of $15.55 at tiny ELK Energy Inc. in Essex, near Windsor, to a high of $90.84 for seasonal customers in remote areas served by Hydro One.

“We still get issues like ‘Why is my bill so high?’ We still hear from disgruntled customers. It all depends on the home, the age of the home, whether people are on a fixed income.”

Toronto Hydro, one of the largest local utilities in the province, is above average at $37.57. London, Kitchener, Sudbury and Windsor are all in the $24 to $27 range.

While the skyrocketing cost of electricity has been widely publicized by critics — up 101 per cent since 2006, according to Hydro One — delivery charges, up less than 50 per cent in the same period, are getting more attention from ratepayers now for good reason, opposition parties say.

Complaints peaked after a hot summer with air conditioners running constantly and picked up again when the cold weather hit, particularly in the north where mild spells are rare. Air conditioning, for example, can account for 50 per cent of an electricity bill during a long hot spell.

“Their anger is the result of being ignored by this government for almost a decade and now all of a sudden the government says they’re going to fix everything,” adds Progressive Conservative MPP John Yakabuski.

“They don’t have any credibility.”

Typically, delivery fees are 30 to 40 per cent of an electricity bill, he notes.

“We recognize that the investments required to upgrade an antiquated system prone to brownouts and blackouts has come at a cost to electricity consumers, and we’re trying to fix that.”

Aside from buying energy-efficient LED light bulbs, improving insulation and cutting down on drafts, there are small ways to cut down on electricity bills that many people don’t think of, says an efficiency expert.

“I still know people who are setting back their electric baseboard heaters at night,” says Ben Polley of Evolve Builders in Guelph, which specializes in green homes and renovations. “They’re hurting themselves.”

Ratepayers with electric heat should be taking advantage of cheaper hydro rates between 7 p.m. and 7 a.m. and on weekends to crank up the heat, says Polley, who recommends a programmable thermostat for the job.

Time-of-use rates overnight and on weekends are less than half the peak daytime prices from 7 to 11 a.m. and 5 to 7 p.m.

Cutting down on drafts, by targeting cans of spray-foam insulation in open areas behind the walls surrounding windows and doors, or using weather stripping and caulking in those areas and where walls meet foundations or roof lines, can also make a big difference.

“It’s really simple, low-tech stuff and low skill for the average person. The payback can be good,” adds Polley, who says such measures can allow homeowners to lower their thermostats by a couple of degrees because rooms feel warmer when drafts are eliminated.

Insulation should never be left out of any major renovation because it doesn’t add much to the construction cost but makes a huge difference in energy bills.

Other potential measures — without tearing a house apart — can include adding solar water heaters and, for small families, on-demand water heaters with small tanks that use half the electricity compared with traditional models with large tanks.

They can account for as much as one-third of a household hydro bill, so it’s worth replacing the old-style tanks when they wear out after 10 to 15 years, says Polley, a former Green party candidate.

“The cost is double a normal hot water heater but the payback is there after a few years,” he said.

Polley himself lives in a fully renovated and thoroughly insulated Ontario cottage home first built in the 1800s and — in what seems counterintuitive — disconnected his natural gas line to the furnace and installed electric baseboards.

They were cheaper than a new furnace and can be augmented with his wood stove if necessary.

“Right now my house is set at 15 degrees,” he says, wearing jeans and a polar fleece top over a T-shirt. “That’s all our bodies need if there are no drafts.”

New Democrat MPP Peter Tabuns, who spent about $3,000 a few years ago insulating the attic and some walls in his Toronto-Danforth home along with buying LED light bulbs, says he noticed a drop in his electricity and natural gas use.

“It was not a lot of money. We were surprised,” says Tabuns, who spent the money on top of a government subsidy program for energy retrofits and called on the Wynne administration to offer more help to homeowners.

“We desperately need people to get the work done without having to lay out a lot of money up front.”